Been to the movies lately? Notice how many choices have titles that end with the number 3? 4? How about 7--part 2?

Hollywood has a strange fascination with movie sequels, not that they don't make sense. Audiences love to see their favorite characters back in action with bigger budgets, bigger stunts, and more entangled love triangles. But do moviegoers really want a fifth Final Destination? And more importantly, do sequels actually net film studios any real profit?

(Click on the static image for the live viz. Apologies for the inconvenience, we're experiencing some issues with our site.) 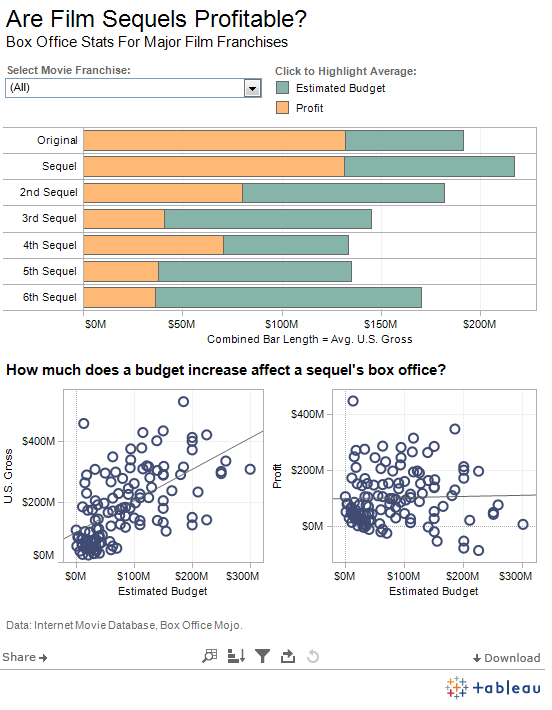 The answer is "yes," with a "but." After the first sequel, each subsequent sequel tends to make less profit than its precursor, and this is true across most popular movie franchises. It's also worth noting that higher budgets do correlate with a bigger box office--but not necessarily with a bigger profit. So, is it worth it for film studios to make sequels with bigger, more elaborate sets and visuals?

Use the filter at the top to view box office numbers for different film franchises, and check out MovieScope Magazine's feature on this very topic for an even deeper take on the economics of film sequels.

It's interesting to see that

It's interesting to see that the sequels make as much money as the originals do, on average, but the following sequels do not. I would have thought they would make more $ than the original because they can build on the fan base.

This was an awesome viz.

This was an awesome viz. Clear, concise and great subject matter. Shared with several of my coworkers, even. The only improvement I would make is color coding the circles in the budget vs. profit section (when the viewer drills down to an individual franchise) to highlight which sequel had which budget and which had which profit.

@Katie: That's a good idea, hadn't thought of that. I'll give it a shot.

I have to disagree with Katie

I have to disagree with Katie - this is a horrible chart. It's very muddled and confusing.

I spent ages trying to work out what exactly I was looking at. You've stacked the budget (money spent) on top of the profit (money made, after costs), which makes no sense, as one is a negative value and the other a positive.

The length of the bar in total is the movie's gross, which isn't noted on the chart unless you hover over it and work it out for yourself. The fact that the profit is tied to the left edge, and budget added afterwards is a confusing narrative. It implies increasing the budget will somehow boost the film's overall gross.

As profit is what's left after budget is subtracted from gross earnings, it might have been much better to show budget as a negative value, and profit as a positive. Same chart, but just rearranged slightly.

(also a minor point - pretty hairy to include "6th sequel" with only two(?) data points...)

My bad - the combined bar

My bad - the combined bar length is described under the chart, didn't see it there.

This is a nice viz, where are

This is a nice viz, where are the Bond Movies?

I've been waiting for someone

I've been waiting for someone to notice! The Bond movies aren't included since there's so many of them and very often the films aren't necessarily sequels to their predecessors. It's more of a continually reinventing franchise that more or less sports the same couple of tricks in new ways--which is difficult to compare to franchises like the Matrix, Batman or the Narnia films.