It wouldn't be TC without the ultimate data showdown—Iron Viz—and this year was no different. Three fierce contestants took the virtual stage to have their “data with destiny.” The Iron Viz global qualifier contest’s finalists battled it out in an intense lightning round of live viz-tastic storytelling. In front of a massive live audience with thousands of people from across the globe all watching with front row seats, the Iron Viz contenders had 20 nail-biting minutes to whip up an awe-inspiring viz to energize, electrify, and reign supreme.

Hosts Keisha Rose and Andy Cotgreave were back to entertain us. And, while many viewers watched from the comfort of their homes in their pajamas, our hosts didn't let a pandemic keep them from donning their finest attire fit for the world's most prestigious analytics competition. Their excitement was contagious as they introduced this year's visualization superstars, Alex Jones, Christian Felix, and Simon Beaumont, who earned their place by rising to the top from hundreds of incredible health and wellness data submissions. The stakes were high as the three finalists prepared to click, drag, and drop their data-loving hearts out to win the trophy as well as thousands of dollars in prize money for themselves and the charity of their choice.

For the 2020 Iron Viz Championship, the data consisted of three data sets on the theme of the Environment: Climate at a Glance (NOAA), WHO Global Urban Ambient Air Pollution, and CO2 Emissions and Ancillary Data for 343 Cities (Pangaea).

The formidable contenders needed to impress a world-class panel of viz savvy leaders, composed of last year’s Iron Viz Champions Joshua Smith and Hesham Eissa, Tableau VP of research and design Dr. Jock Mackinlay, and Tableau Senior Vice President of Product Development Ellie Fields. The judges evaluated the vizzes based on three criteria: design, analysis, and storytelling. The Judges' Score made up 90% of each contestant's total score, while the audience weighed in with the remaining 10% of the votes via twitter.

Now it’s time to take care of viz-ness (the Tableau Way) and dive into the powerful environmental data stories our contestants told.

Alex Jones “took our breath away” with his visualization comparing air quality versus emissions.


Sous Vizzer Lauren Kearney advised the audience that Alex was using two out of the three data sets for the competition to compare high levels of air particulate to emissions, so he had to do a lot of prep work. Alex used six different metrics and popular new Tableau features like set actions and parameter actions in his dashboard to make for great end-user exploration. This was a bit tricky because the metrics—like emissions and energy usage—were on different scales. He was able to use Tableau Prep to find the minimum and maximum to normalize them to help with the shapes' size for direct comparison. Host Andy Cotgreave asked Judge Jock Mackinlay if Alex's use of multiple shapes with various sizes and metrics was a glyph. Jock explained that the design “is related to a glyph, but each of the marks was encoding a different measure or more than one measure, which is much more effective for understanding.” 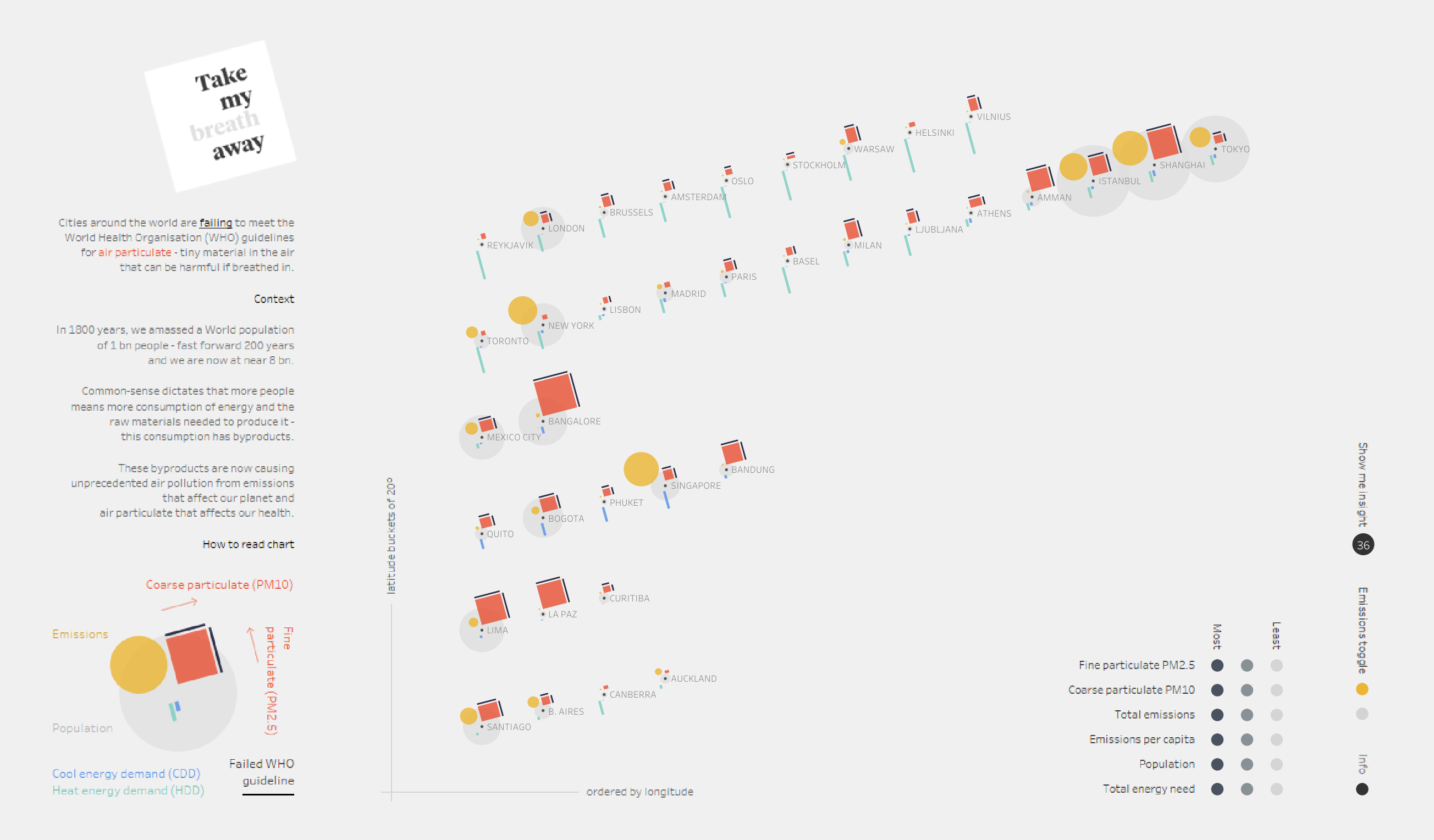 Christian Felix’s data visualization gave him “hope” that the quality of the air we breathe can improve over time.

Christian joined the WHO air pollution data with the CO2 emissions data in Tableau Prep. Sous Vizzer Sasha Singh said that although it was Christian’s first time using Prep, he was able to figure it out really quickly—"What a pro!” Another trick Christian did was to use Prep to densify his data and create a couple of calculations to design curved lines on his map. Andy Cotgreave commented, “using a color legend in the title is a great technique. A bar chart at the top feeding lines into the map beneath is reminiscent of Hesham Eissa’s visualization last year—creating a really powerful and striking graphic approach. Nice work.” The results of his focus on PM2.5 (learn more about particulates here) and air pollution data showed a huge global divide between cities with healthy and unhealthy breathing air. Thankfully—deep sigh of relief—the data story left us with the hope that air quality can improve with change. 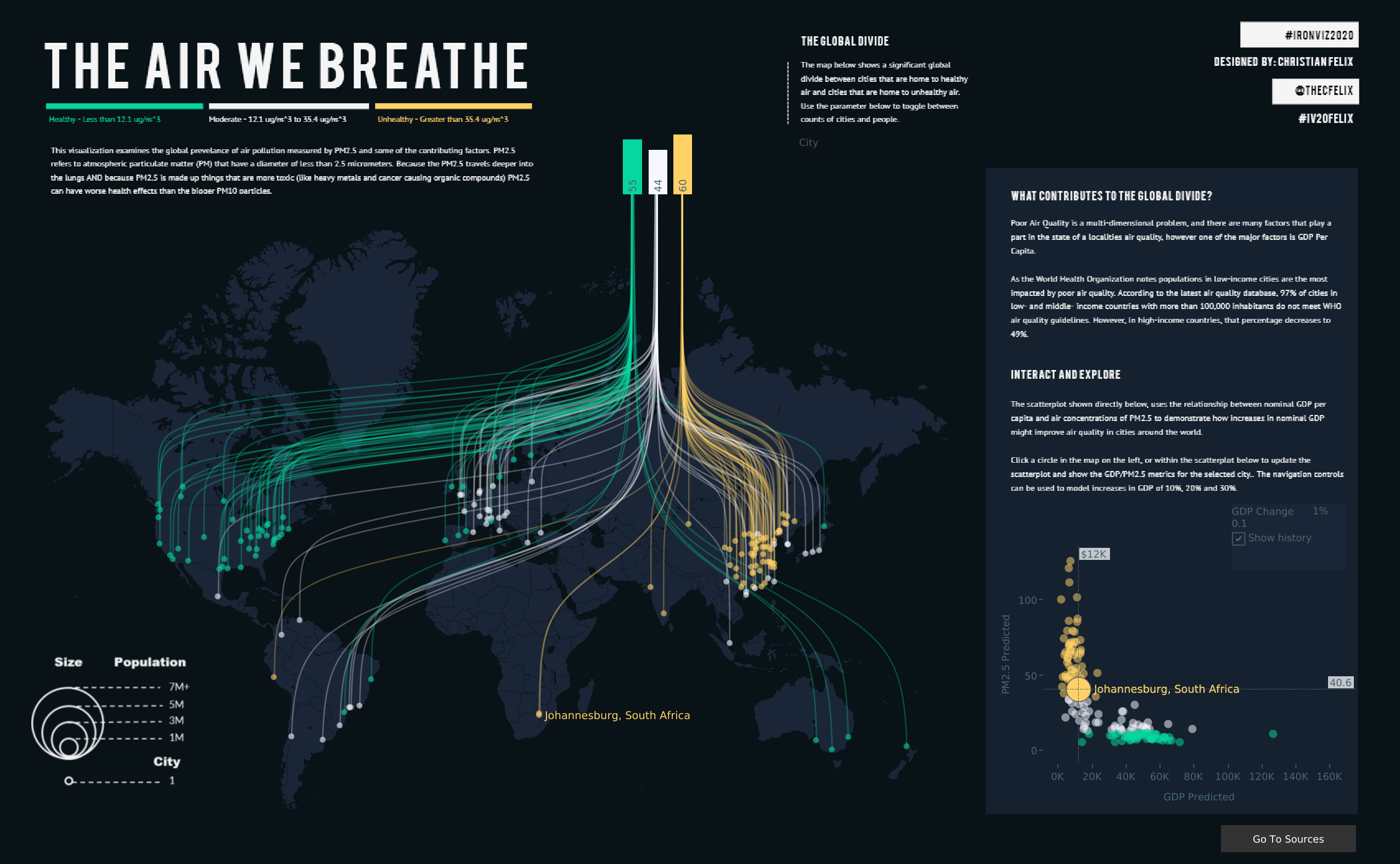 Simon Beaumont’s data story explored whether city life's conveniences are worth the risk to your health.

Simon prepped the data to bring in just the capital cities worldwide. “He was really excited about being able to use simple charts and beautiful colors to tell the story.” During his build, Host Keisha Rose observed, “sometimes you have no idea where contestants are going with a viz and then at the end you’re like oh it makes so much sense now that it’s all together. Sous Vizzer Courtney Guc commented, “I am not going to ruin the surprise here—but let’s hang on and see what sorting has to do with it in the end.” Simon was building a Gantt chart that highlighted interesting details about countries with different emission policies. His data story drew attention to Oslo because they have committed to reducing emissions, and it appears to be working. This data contrasted with China, which is off the map, but Simon commended them for “actually collecting and reporting that data.” 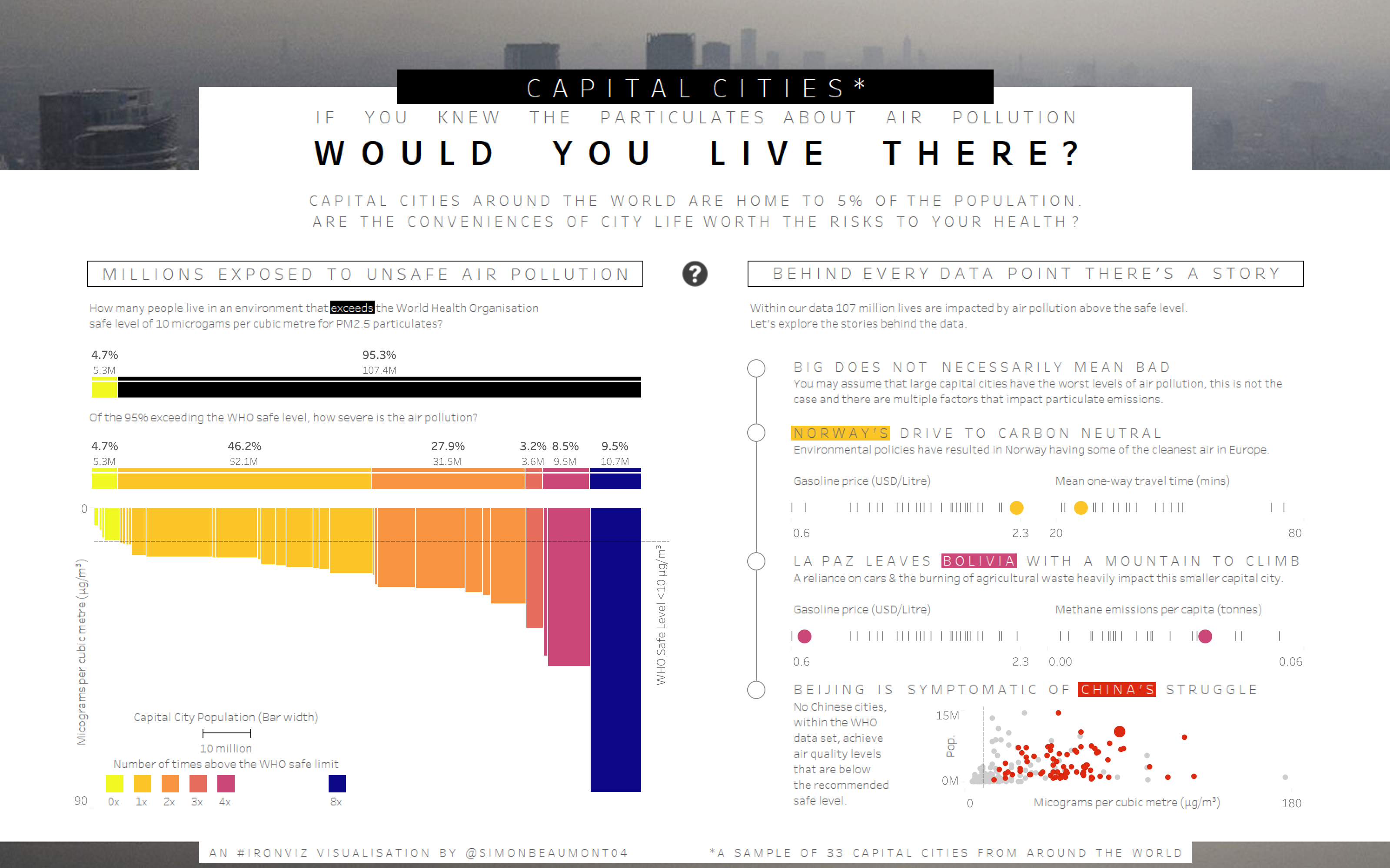 And the Winner is…


The judges agreed the work produced was incredible this year. What an outstanding performance from all of the contestants. Ellie Fields summarized it best, “It’s always fun to see the creativity, the design, the viz best practices, and the deep analysis come together to create something really cool.”

Each of the Iron Viz finalists had a different approach, but all three wowed the crowd. One viz simply out-edged the competition. Congratulations to Christian Felix and his charity, The Nature Conservancy! In addition to his wife, Christian thanked connections in the Tableau Community—”people like Lindsay Betzendahl, Kevin Flerlage, Justin Davis, his Tucson TUG Team, and many others who have been super encouraging” on his journey. We have to agree—we have the best and most supportive #DataFam worldwide.

See a breakdown of the scores below. 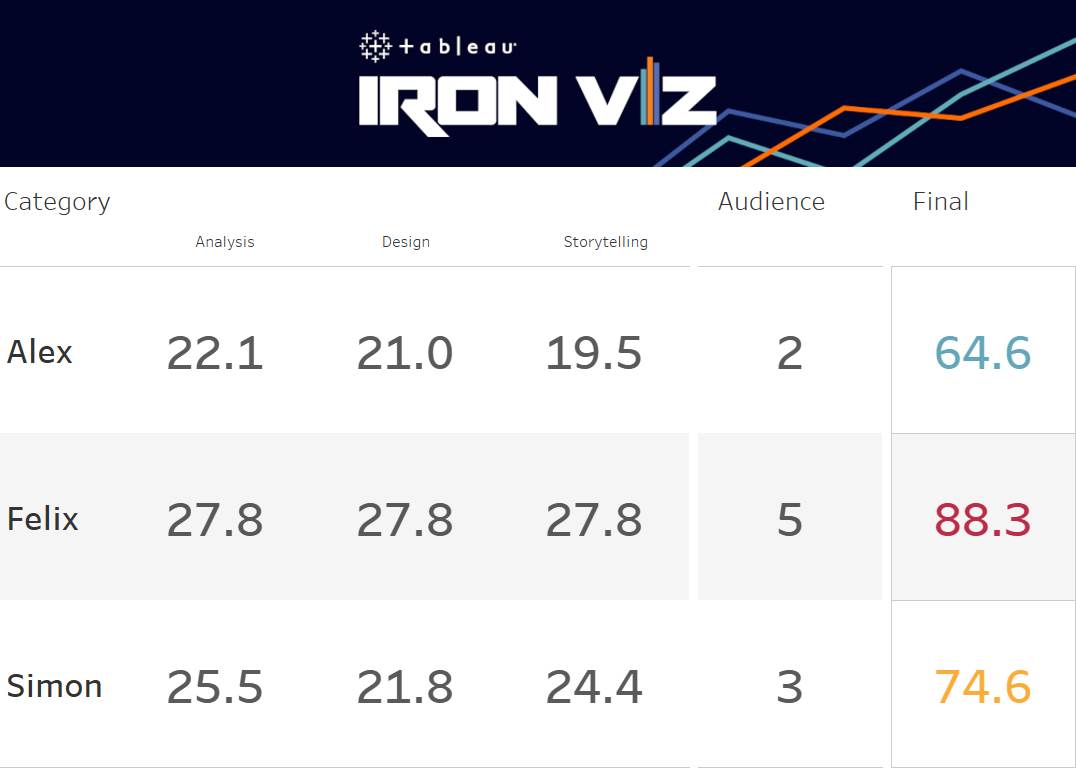 Did you out on the action or want to watch it on repeat? We’ve got you covered. You can relive every viz-tacular moment here (note: you will need to sign in to access on-demand content). If you want to see each full 20-minute build in detail, with commentary from each contestant, catch three special episodes of If Data Could Talk over the next month. More information is coming soon.

More exciting news—students showed up this year like never before, showing us their unbelievable skills. To give them a chance to shine, we are happy to announce our first-ever Iron Viz Student edition. If you’re a student interested in showing off your data chops, go here to learn more.

Don’t want the inspiration to end? Iron Viz is a chance for incredible vizzers who spend their days on Tableau Public—celebrating its 10th Anniversary this year—to give the world a behind-the-scenes look at their magic. So go on—get inspired by over 3 million interactive data visualizations created by more than 1 million people globally. From music to sports and politics, there's a viz to explore for almost any topic. And a new storytelling masterpiece is featured daily on Viz of the Day. Sign up to have a healthy dose of 'viz-spiration' delivered to your inbox.

This officially ends 2020 Iron Viz. 2020 has been a memorable year, and so has this competition. Congratulations to all who participated, and again, well done to Christian, who reigned supreme.