As our third and final viz contest of the year wraps up, we finally have a winner to sit alongside Anya A'hearn and Ben Jones at the Iron Viz Championship: Adam McCann.

Adam's viz looks (at the start) to be your standard electoral map. However, one small filter and three parameters change everything. If you flip the filter from "Current Poll" to "Model Projection", you can manipulate the status of the presidential approval rating, unemployment rate and S&P 500. The model then calculates (based on previous presidential elections), the probable allocation of states. Ordinarily we would be skeptical, but Adam's background as a predictive modeler suggests his model might be pretty good.

As if that wasn't enough, Adam also went and created a viz we have never seen before in Tableau: a cartogram. Often used by those who like choropleth (filled) maps, but dislike their propensity to skew results visually, cartograms are always a custom created affair and Adam took the time to make the (first?) one in Tableau Public.

Enough talk! Use Adam's viz by clicking the image below. Ordinarily we'd squeeze it on the blog, but it is simply too good to change. 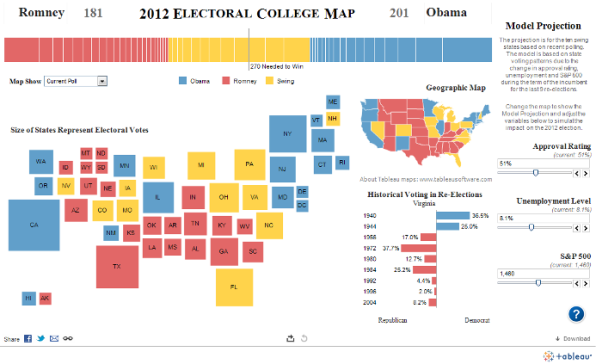 Adam wasn't the only who created a win-worthy visualization. Jerome Cukier, a long time Tableau Public user, created a fantastic storyline on the French conservative party (the UMP) that garnered the most views of all of our contest visualizations. Unfortunately it was also so amazingly enormous it cannot be shown here, but the (very sleek) top is shown below. For his efforts, Jerome wins some serious bragging rights and the $500 Crowd Favorite prize. 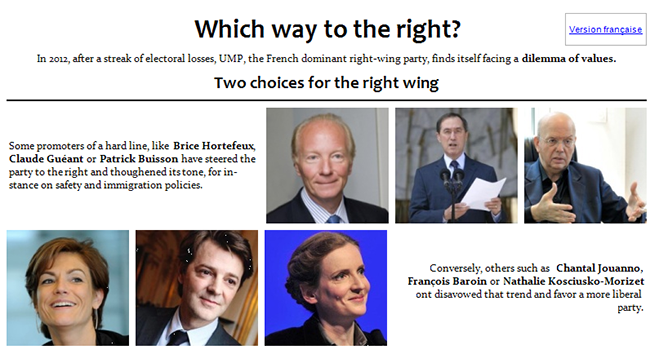 Time and practicality limit our ability to call out all of our contest entries, but we wanted to make sure we mentioned a couple of all-star honorable mentions:

What a way to close out our contest year! With that, we will sign off, but remember to catch our three contest winners competing at this years Iron Viz Championship at the 2012 Tableau Customer Conference.